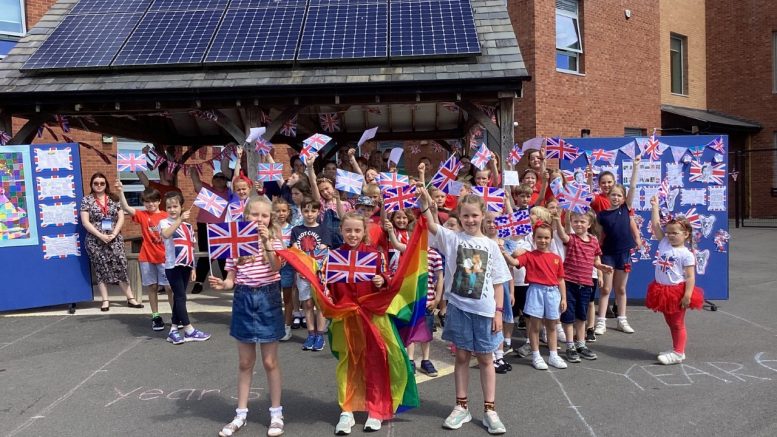 PUPILS of Upton Heath Church of England Primary School put on a whole school performance inspired by Joseph and the Amazing Technicolour Dreamcoat recently, in celebration of the Queen’s Platinum Jubilee.

Students from CCSW’s performing arts department worked with Upton Heath pupils over a period of four months to plan, create and execute the performance, which took place in June.

Featuring songs, dances, poems, British Sign Language, Makaton and acting, the performance also included facts about each of the seven decades of the Queen’s reign.

Upton Heath worked with Cheshire College South and West for the Platinum Jubilee performance of Joseph and the Amazing Technicolour Dreamcoat.

CCSW’s course team leader for performing arts Paul Moss said: “Creating the performance inspired by Joseph was a fantastic opportunity for my learners to do something they had never done before.

“Everyone enjoyed this experience and we have had a chance to share skills and develop as both performers and facilitators. The end result was amazing to see. We have loved our time working with Mrs Lewis and Upton Heath.”

Mrs Judith Lewis, Year 2 teacher and history lead, explained: “The aim of this production was to highlight the varied aspects of life in Britain during the past 70 years.

“We wanted to help our children to make memories on this unique historical occasion, memories that they can pass on to future generations. The fact that this production, from the beginning, had the support of Paul Moss and his CCSW students has only added to the value of what we produced. The show was a real extravaganza, enjoyable for the cast and appreciated by the enthusiastic audience.”

CHESHIRE West and Chester Council is launching a project to stop the spread of fake news and disinformation about the COVID-19 vaccine and make it easier to get vaccinated. …

RESIDENTS in Cheshire West will be given the opportunity to decide which historic spaces and buildings should be prioritised for safeguarding, as the Council looks to establish a ‘Heritage Strategy’. …

CHESHIRE-BASED eco-friendly baby care company Pura has announced that it is partnering with Plymouth-based MLA College to offer 10 fully funded bursaries and scholarships in sustainability. Chester and District Standard | Business …