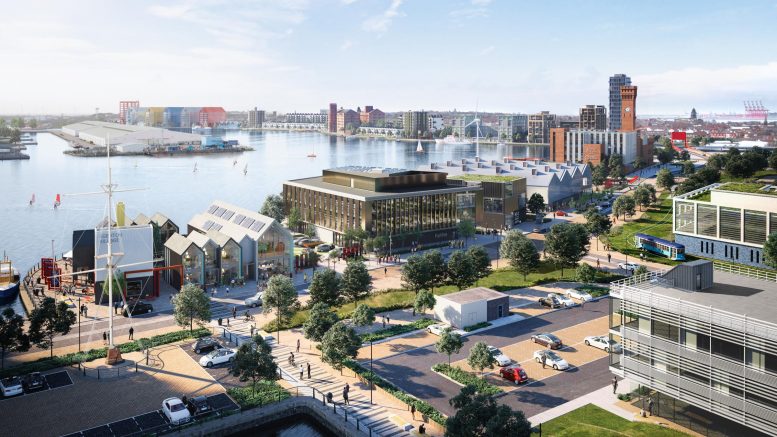 Major projects are moving forward at pace across Wirral, with hundreds of homes set to be built across the borough.

Whether it is the huge Wirral Waters project on the Birkenhead docklands or the massive plans to bring some life back to Birkenhead town centre, huge developments are making progress.

The LDRS has looked at what could happen with these projects and others next year.

This project, led by Peel L&P, which could see up to 13,000 homes built in the borough over the next 25 years, was criticised for being slow to get going.

However, the first homes have now gone up.

At East Float, on Dock Road, the first 30 households will move in to Urban Splash’s ‘Row House’ homes and ‘Town House’ homes early next year.

Elsewhere at Wirral Waters, Peel L&P said they hope builders will be on site at a number of other projects across the development next year, subject to factors such as gaining planning permission.

These include the Legacy Project, a plan for 500 apartments including 100 affordable new homes within the emerging Northbank neighbourhood at Wirral Waters and Belong Wirral, a dementia care and accommodation facility for over 100 people.

As well as this, construction of the MEA (Marine, Energy and Automotive) Park will get underway, with its aim to create a centre for manufacturing, logistics, research and development, and large scale assembly and modular construction.

The project to build a new amenity village on the banks of the East Float docks will also move forward.

It is hoped that this will help improve the area for existing and new residents, students and workers who are starting to populate the Four Bridges neighbourhood.

A big part of Wirral’s future is the redevelopment of Birkenhead town centre.

This was given a major boost earlier this year, when Wirral Council’s strategic applications sub-committee backed some of the core proposals to boost the town.

The building of a new commercial quarter for Birkenhead, including the creation of 1,300-1,500 jobs over the next 15 years

The building up to 651 new high-quality, sustainable homes

Improved public transport links and enhancements to the bus station

Cllr Stuart Kelly, who chairs the planning committee, said: “Far and away the biggest planning application we approved this year was the start of the Birkenhead regeneration masterplan in the area around Europa Boulevard and Conway Street.

“People can already see work taking place since it was approved.”

The Liberal Democrat councillor added: “Key benefits of the scheme will be the creation of 1,300-1,500 jobs over the next 15 years and the supply of 651 new high-quality, sustainable homes of varying type, size and tenure contributing to the borough’s housing need.”

Other plans in the borough which are set to be delivered after gaining planning permission include a project for 43 homes for affordable rent on New Chester Road and Chatham Road in Rock Ferry.

As well as this, up to 31 homes have been approved at the former Gladstone Social Club on Church Road in Tranmere.

The flats will be built at the site of Gospel Hall on Pensby Road.

A LONG established family business is flourishing after providing a lifeline during the pandemic. Chester and District Standard | Business …

AN archaeologist from the University of Chester appeared on national TV. …

Major projects are moving forward at pace across Wirral, with hundreds of homes set to be built across the borough. Chester and District Standard | Business …

FASHION design graduates at the university of Chester showcased their hard work at a special show. …

A UNIVERSITY of Chester graduate and guest lecturer has won an international award celebrating inspirational women and recognising her runaway success in the fashion world. Chester and District Standard | Business …