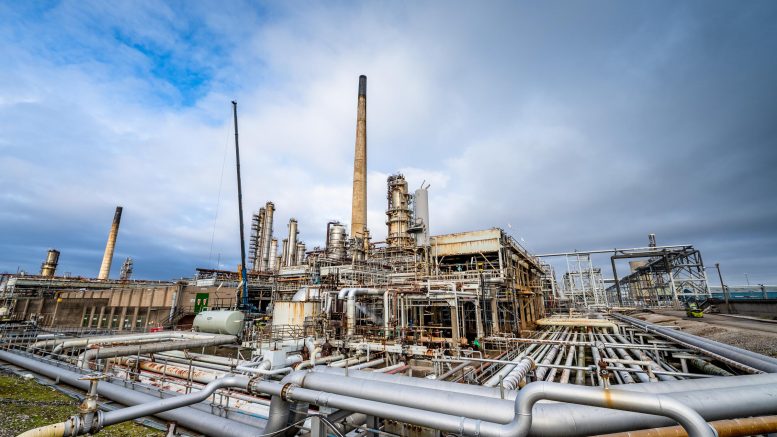 THE sight of large flames roaring from the Stanlow Refinery could be significantly reduced in the future if £45 million plans to install a new, more eco-friendly furnace at the site are given the green light.

Essar Oil UK has officially announced plans to build a new £45 million furnace capable of using hydrogen as its fuel source, in what the company says would be a UK first.

The scheme will provide a number of improvements that will lead to benefits for Stanlow and the surrounding area, including lower carbon emissions due to gas-only firing and new burners that emit lower levels of nitrogen oxide (NO) and futureproofing to enable the use of sustainable fuel types in the future such as hydrogen.

The furnace is currently being fabricated in Thailand. The largest single module is 26.5 metres long, by 18.5 metres tall, by 14.5 metres, and the furnace will be delivered on site almost fully constructed.

With an investment of £45 million, the new furnace forms a key part of the company’s strategy to reduce its own carbon emissions.

The furnace is unique in that it will have the capability to run entirely off hydrogen, becoming the first of its kind based at a UK refinery.

It has an improved energy efficiency of four per cent compared to existing furnaces, which will save 16,600 tonnes of CO2 per annum, as well as reducing ongoing maintenance costs.

Set to be installed in 2022, the furnace will become fully operational next year.

From 2026 onwards it will be fuelled by hydrogen produced at Stanlow as part of the HyNet North West decarbonisation cluster.

The refinery plans follow the launch of Vertex Hydrogen last month, a new Essar-led joint venture, in which the company will invest £1 billion over the next five years to drive down emissions, including the development of new hydrogen production plants at Stanlow, forming a central part of the HyNet North West decarbonisation cluster.

Vertex Hydrogen will develop the world’s first and largest blue hydrogen production plant at Stanlow. Hydrogen will be used at the site and will be distributed to industrial businesses in the region to support their own transition to low carbon.

Deepak Maheshwari, Chief Executive Officer at Essar Oil UK, said: “We have hugely ambitious plans for Stanlow and are committed to making it the UK’s first low carbon refinery.

“By affecting a significant and rapid transition to hydrogen, we are securing the long-term future of this vitally important national asset whilst also playing a key role in supporting the UK’s plans for building the low carbon economy of tomorrow.

“We would like to thank our community for its ongoing support of our refinery at Stanlow.”

Essar’s Stanlow refinery – which supplies 16 per cent of the UK’s road transport fuels – sits at the heart of HyNet North West.

The initiative was designated as a Track 1 Industry Cluster by Government in October 2021 and plans to produce 1GW per year of hydrogen – the equivalent to the domestic heating energy used by a major British city, for example the Liverpool City Region.

As well as being used by Essar, the hydrogen will be supplied to a wide range of businesses across the North West, including Tata Chemicals Europe, Encirc, and InterGen.