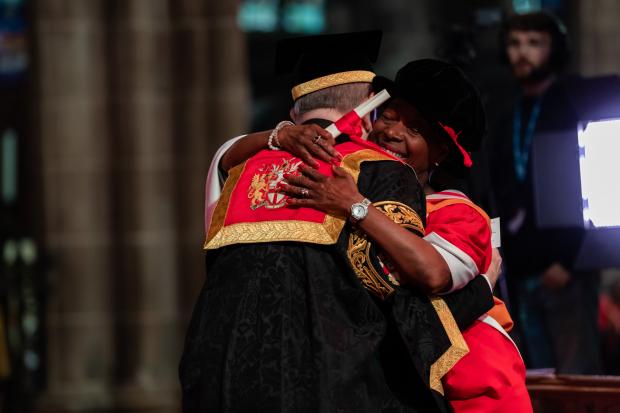 Celebrated children’s television producer Baroness Floella Benjamin DBE DL was honoured alongside several others as the University of Chester concluded its graduations ceremonies at Chester Cathedral.

She is one of seven individuals receiving an honorary award from the university this week alongside thousands of students during three days of ceremonies. Many were receiving awards which had been on hold due to the pandemic.

Vice-Chancellor of the University of Chester, Professor Eunice Simmons, said: “As we reflect on the past few months’ of graduation ceremonies, it has been a true joy to see so many students finally have their opportunity to walk across the platform at Chester Cathedral to collect their hard-earned awards, after such a tumultuous couple of years.

“They have achieved outstanding outcomes during their time at the University of Chester and are now making their mark on the world. We congratulate them and wish them every success in their future.

“We are also delighted to welcome seven more individuals who have given so much to society. They thoroughly deserve their honorary degrees that reflect all that they have achieved. We are delighted to have them join us on these special occasions.”

Baroness Benjamin, who has worked in children’s TV for more than five decades, is perhaps best known for Playschool and Play Away, and more recently CBeebies Bedtime Stories. Her production company has also produced shows like Mama Mirabelle’s Home Movies, Chuggington and Sarah Jane Adventures. She was presented with a Doctor of Letters award on Tuesday (May 24).

Stephen Hough, a distinguished pianist, composer and writer has received an honorary Doctor of Music award to add to a MacArthur Fellowship and a CBE, alongside several individual awards for his performance from the likes of the Royal Philharmonic Society.

Wednesday (May 25) saw Christine Gaskell CBE, DL in receipt of an honorary Doctor of Business Administration award. Working within the motor industry, including as a board member for Bentley Motors, Christine has previously gained an MBE for services to training and apprenticeships and a CBE for services to Cheshire and Warrington.

Lady Redmond MBE, a chartered accountant and a founder of one of the UK’s largest independent television drama production companies alongside husband Phil, was given an honorary Doctor of Letters awards also. Having held senior and trustee positions with National Museums Liverpool, Riverside Housing Association and Alder Hey Hospital NHS Children’s Charitable Trust, she has supported many charitable and not-for-profit organisations and was awarded her MBE in 2011 for services to the community.

An honorary Master of Science award was presented to Susan Flood, an award-winning photographer and filmmaker, author, zoologist, adventure travel leader and public speaker. Susan spent 11 years in the BBC’s Natural History Unit working on acclaimed documentaries such as The Blue Planet and Planet Earth with Sir David Attenborough.

Friday will see Laura Deas, an international skeleton athlete who has represented Great Britain at the past two Olympic Games, winning a bronze medal at PyeongChang 2018 become an honorary Master of Science. She became part of Team GB history by becoming both the first and only Welsh woman to win a Winter Olympic medal. She has also won multiple World Cup medals and competed at five World Championships over a 13-year career.

The final ceremony of the week will see David Pollock awarded an honorary Doctor of Business Administration award. David founded technology services provider Chess in 1993. Chess has been in the The Sunday Times 100 Best Companies to Work For, ranking number one in 2018, and has been in the top 100 for each of the past 14 years.

David was also awarded Best Leader by The Sunday Times 100 Best Companies to Work For in 2017 and 2018 and received the Innovation in Business Award for his unique happiness training in 2016.

WORK is underway on a huge warehouse development in Cheshire. Chester and District Standard | Business …

WOODLANDS Primary School on Eddisbury Road in Ellesmere Port is opening up the school to encourage people caring for tots and babies to come in and share a cuppa from this September. …

A CHESHIRE-based firm has completed construction work on the multi-million-pound extension of a factory. Chester and District Standard | Business …

Students joining this exciting scheme are treated as if they are real journalists, writing articles that are published on Newsquest’s online news sites …

JEWELLERS Mappin & Webb, who recently opened their new store on Eastgate Street, will be the title sponsor of Ladies Evening at Chester Racecourse on Friday, June 24. Chester and District Standard | Business …