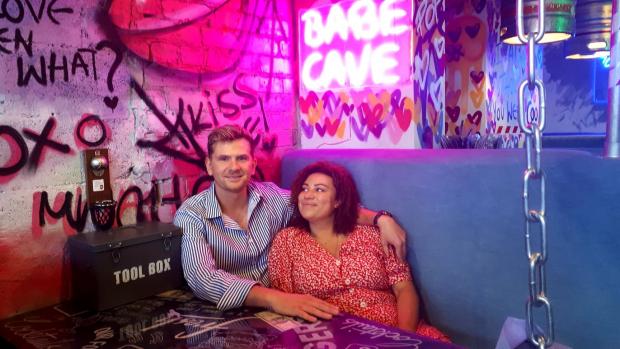 A RESTAURANT director ditched his corporate “high life” after finding true love and business success in a seaside Wirral town.

Originally from Stirling in Scotland, Richard Fergie was the director of a large restaurant chain where he looked after over 150 members of staff.

On the outside, it appeared that Richard was living a high life when the reality was very different.

He said: “To everyone looking in, life was great for me, and I was smashing it as director of a big well-known hospitality brand but what they didn’t see was the stress that brings.

“The company exploded as a business and with that quickly came dealing with thousands of customers every week, over 150 staff, financial pressures, and even a fire at one of the sites.”

With the growing pressures of his job, Richard said the fast-paced lifestyle of his job began to take its toll.

He said: “As we opened more restaurants I ate and slept less.

“The thing that really hit home for me was when I was in Spain on a much-needed holiday.

“I remember being at the beach on my own watching the sunset and thinking how nice it would be to share that with someone.

“I had been far too busy for love but suddenly realised I was really lacking something in my life.”

Richard joined a dating site and in December 2020 he met a woman named Ellie from Wirral and quickly fell in love.

Richard said: “I didn’t think love was possible working in my fast-paced director’s role but meeting Ellie has been the best thing that’s ever happened to me.”

Richard moved from Scotland to Wirral to be with Ellie and in November 2021 opened The Good Hood in West Kirby.

Offering fun, messy, and juicy food such as craft burgers and gourmet pizzas, and colourful, creative cocktails, Richard has brought his knowledge from creating a multi-award-winning brand to opening a seaside town independent.

He said: “The difference between life back then and my life now is pure joy — the slower pace of life makes me appreciate things more, the little things, and West Kirby is utterly charming.

“The people here are so friendly and accepting of an outsider who’s new to the area.”

West Kirby’s New York-style hang-out has been a big hit with locals due to its mouth-watering comfort food, creative cocktails, and relaxed vibes

Richard said: “The Good Hood is about creating somewhere you can kick back, relax and hang out, with a simple, raw, and urban style and top quality, fun American food.

“The feedback has been amazing and people love the fact we have one of the only sun traps in West Kirby at the back.

“It feels so much better running a small independent.”